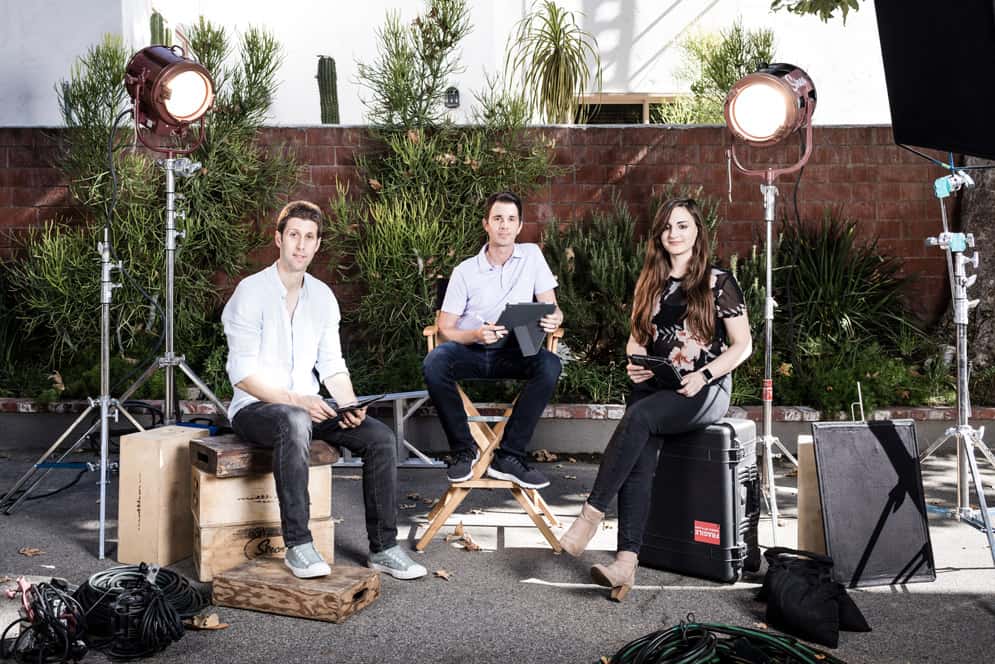 Steven Vitolo was working as a script coordinator on a television pilot in 2013 when he had a revelation. “We had two weeks before we started shooting, and every night there were revisions, so every night I was putting out a full 50-page script that would then be printed out for 100-plus people. And I’m like, this is crazy how much paper we’re going through. We’re writing the script digitally, why are we then reading it on paper?”

Vitolo founded the company in 2013 with Zakary Selbert (Questrom’05), Scriptation’s chief investment officer, and Felipe Mendez, chief technology officer. Vitolo and Selbert had friends in common at BU, but didn’t actually meet until they both were living in Los Angeles. Also on the staff are marketing and social media manager Alexandra Diantgikis (COM’15) and software engineers on contract.

The veteran TV writer (Blackish, Crowded, Hot in Cleveland) hatched the idea for Scriptation, a digital script annotation and distribution app that’s now moving Hollywood writers, actors, producers, and location scouts off paper scripts and onto their laptops, iPads, and even iPhones.

“I am not the first person you would think of as a green, sustainability person, which shows you how insane the waste is,” says Vitolo (COM’05), CEO of Scriptation LLC, a privately held company that has attracted well-known Hollywood names as investors, like Emmy-nominated actor-director Rob Morrow.

The annotation app allows users to easily transfer their script notes to subsequent drafts without having to copy them over—and over, and over. The Scriptation website promises that it will end “script change hell.”

For the last two TV seasons, Vitolo has been talking up the app in his job as script coordinator for the ABC hit comedy Blackish. “The thing I’m really proud of,” he says, “is that every time somebody would move to Scriptation, they would tell the production coordinator, ‘Take me off your distribution list, I just want electronic copies.’ We went from 100 people on paper to 80 to 70—I don’t know what the final number was. But we saved tens, if not hundreds, of thousands of sheets of paper.”

Actor, director and Scriptation investor Rob Morrow uses the app on the set of Chicago PD.

Word of mouth about the app spread, and now other shows and studios have begun to use it as well. One veteran writer calls it a game-changer.

Most scripts for TV dramas and comedies are written on computer, in Final Draft or a similar program, and then printed out or exported as .pdf files for distribution. While Scriptation isn’t the first to attempt to take the distribution process digital, it’s come up with fixes to some issues that plagued previous efforts.

The biggest challenge was figuring out how to move notes from one script iteration to another. On paper, actors mark up their scripts, highlighting their lines and scribbling comments on character development. Directors make notations about the camera angles to use in a particular scene. Producers highlight budget issues, and props people underline the place where the script calls for a red Trans Am or a .45 automatic.

“I’m insane how much I mark up scripts,” says Morrow, the star of TV shows like Northern Exposure and Numb3rs and films like Quiz Show. He’s currently appearing in the NBC drama Chicago PD. As an actor, “as soon as I start working on a project, I start writing in the margins,” he says. “I write all kinds of notes, some of which I never refer to again, but it’s the way I enter into the world of the story.”

And when Morrow’s directing a show, he fills script pages with diagrams and shot ideas and notes to himself about things he wants his actors to do when the cameras start rolling. Prior to Scriptation, he says, every time a rewrite was delivered, he had to copy his notes by hand to the new pages, which he calls “a nightmare, and as a director, it’s really a nightmare, because your time is so crucial.”

With Scriptation, every time there’s a new PDF of the script delivered, it’s easy to transfer all those notes to the new draft with just a couple of clicks, using Transcription, the app’s proprietary note-transferring algorithm that puts the notes in the right places even if the scene or page numbering has changed.

“For years I’d been thinking, there’s gotta be something, and I asked my assistant and she turned me on to Scriptation,” Morrow says. “I was acting on Designated Survivor then, and I loved it. And then I thought, let me see if I can use it as a director on The Fosters, created by Peter Paige (CFA’91), assuming I would bail at some point in preproduction because I’d get overwhelmed with glitches, but I got through the whole production and didn’t have one problem. Scriptation was like a godsend to me.”

Morrow met with Vitolo and Selbert to give them feedback on the app, and the three hit it off so well that they brought him on as an advisor. Then, Morrow says, he began thinking, “Why not put my money where my mouth is?” and he invested in the company, along with Titanic cinematographer Russell Carpenter and Blackish creator Kenya Barris. “I don’t know if we’ll make a billion dollars,” Morrow says, “but I know we’re going to make some money off it. But my real motive was, I want to be part of getting as many people in show biz to know about this as possible, because it makes our lives so much easier.”

Besides the notes transfer, Scriptation has managed to leap another big hurdle: security. Leaked or stolen scripts can be a real problem for production companies and networks trying to avoid spoilers. When Vitolo and company pitched the app to studios, hoping to get whole productions on board in one fell swoop, security was the main requirement. The company has just released Scriptation Studio, which ramps up the distribution side of the platform by encrypting the documents and giving studios control over user access.

“From the Studio end we can tell if you even take a screenshot, which is admittedly creepy,” Vitolo says with a laugh. “And if your iPad is stolen or someone gets fired and goes rogue, we can instantly disable Scriptation on that device.”

Social media has also had a role in spreading the word about the app. Vitolo says actor Craig Bierko (UnREAL), an avid fan of the app, coined the hashtag #ScriptationNation, and they immediately adopted it.

Producer Clara George, who’s currently working on the Syfy series The Magicians, is another convert. She heard about Scriptation when a few people on a previous job downloaded it, and now she promotes its use on each new production.

“There’ve been a lot of script apps that have all fallen short of what producers actually need,” George says. She’s found Scriptation useful for other documents, such as budgets and schedules, and with it, she says, “I’ve gone from literally a four-inch-thick binder full of pages for each hour of television to maybe five pieces of paper.”

Steven Vitolo will speak about Scriptation and Hollywood’s paper problem this weekend at the daylong Sustainable Production Forum at the Vancouver International Film Festival.